It's 2016 and oh my god reading my old posts is a fucking blast from the past i gotta say. Hoping 2016 doesn't blow, 2015 can kiss my ass. I always hope for some strong year of changes and new beginnings on new year's, but the process of doing better is ongoing and current, not a buildup that releases all on the first and makes everything magically better...so here's for a good 2016.

1. Get a new job (out with the animal welfare finance job, in with something more...challenging)
2. Have a successful semester. Im getting an MBA, which is blowing the 20-year old me's mind
3. Call my family more, we'll all be dead soon (still bitter sorry) and there's nothing shittier than regret
4. Save money so i can pay for my next semester in cash

Hey maybe 2016 will be the year of me getting good sex on the reg...fingers crossed!

I'm having a really difficult time working out in the mornings. I mean, I have to get up at 6 am anyway to feed the cat, so there's no problem in getting up early to work out because I'm already up. But my god I am bitchy in the mornings. I generally slug my way through a ten minute workout aimed towards children because I'm too tired and angry to deal with a 'real' workout. I'm not sure how I could make it easier - maybe joining a gym (ugh too expensive)? Maybe go back to running, except for the fact that it's pitch black outside and I live in the sort of neighborhood where I'm liable to be stopped by cops if I go running around at 6 in the goddamn morning? I just don't want to move in the mornings, and I'm not sure how to fix that. By exercising in the evenings, I guess, and saving the mornings for some gentle stretching and a cup of tea and the newspaper? I mean, it's just a motivation thing. And my motivation is that I hate the fuck out of exercising.

I had a weird dream last night where it was the end of December (2013) and I was wandering around telling everyone "but this feels so sudden! We just made new year's resolutions!" hi brain. Stop making my dreams feel so real, they freak me out. Thanks.

This weekend has been awesome (in the most boring of ways).

1. My last day at My Job of Doom aka my shitty insurance software company with the world's most narcissistic boss with significant anger management issues is OVER.

2. Tomorrow I start my first day with an animal advocacy nonprofit and I couldn't be more thrilled. This job is better than Christmas. Better than birthdays. Better than the puppybowl.

3. After three weeks of having to meet with a bunch of people and hang out constantly with friends (which is super fun, don't get me wrong, but social interaction really exhausts me), I don't have anywhere to be. I don't have anything to do. My ass is not leaving this couch for the next twenty four hours. AND my roommate has been out all weekend. I love having a social butterfly for a roomie.

I used to really dislike the Ferengi (and still roll my eyes whenever I come across a ferengi-heavy episode because I just. don't. care.). But this guy is growing on me: 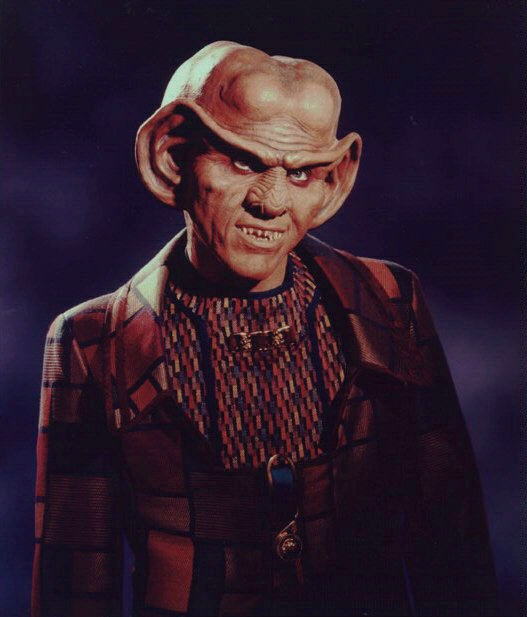 I mean, sometimes he's just the supremely irritating comic relief. Slap an accent on him (besides the one all Ferengi have because their false teeth make it hard for the actors to talk without spitting everywhere) and he'd be Jar Jar Binks, but...he certainly has his moments. And I know he gets more shining moments later on, but I just finished watching the Rules of Acquisition and I quite enjoyed his plotline with the female Ferengi.
Now if he could stop being so annoying when he's a secondary character.

Also, I didn't realize my love for this man until it hit me one day out of the blue: 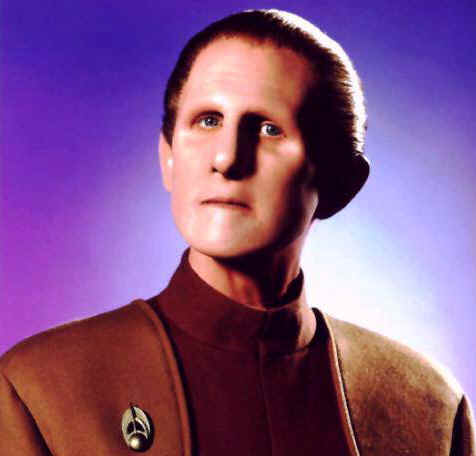 Dude. Odo is AWESOME. And by Odo, I mean Rene's acting. He is absolutely fantastic! I want to act like him. He doesn't miss a beat, he manages even the most awkward and trite dialogue with finesse, and everything he says seems so natural, rather than scripted. It's so easy, in sci-fi TV especially, to be stilted (I'm looking at you Jadzia), and he is superb. Really, really fabulous.

I've been catching up on all my Treks (still have...three episodes of TOS, but I've finished the animated series, only up to season 3 of TNG because I try to watch it on the train but never end up doing it, halfway through seasons 1 and 2 of DS9 because I'm watching them simultaneously, haven't started Voyager, and up to season 3 of Enterprise). This week has been a mostly DS9 mood.

1. I really, really like DS9. We'll see what happens when it starts getting darker, but for now all the characters just make me so happy. Unlike times in Enterprise, where it just took so long for the characters to gel and work together, they had a few moments of contrived difficulty in the beginning and now they're working quite well.

2. Also Garak is the best character ever. And Bashir - despite his rather uncomfortable AWKWARDNESS - is adorable. And Sisko scares the shit out of me sometimes. Like he's gonna snap at any moment but when he does it'll be really cool and he'll talk in that really low voice that lets you know shit is gonna go down. 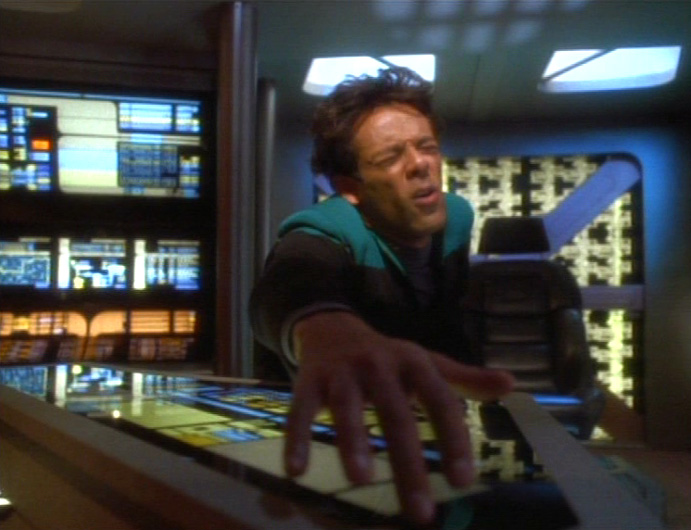 This is from an episode called The Passenger, which is actually a fairly decent episode. The basic premise is a ship sends out a distress call, Bashir and Kira answer it, it turns out the ship is transporting a dangerous criminal, the criminal dies but he manages to implant his consciousness (oooheyooooheyoooh) into someone else. They don't know who until the third act, when it turns out - dun dun DUN! - that instead of the person they thought it was, it was BASHIR! Because we totally didn't see that coming when they said the consciousness was transferred via fingernail scratch and Bashir was the one in the chokehold courtesy of the supercriminal back in the beginning.

What that DOESN'T explain, however, is WHY GOD is Bashir-Vantika such an atrocious ham? This is acting on the level of Shatner, here. And it's especially confusing because he really is fantastic actor - I mean, watch him in any scene as Bashir, and he's continually ace even when he doesn't have any lines - but he has a weird voice and strange pauses and it's like every word is being filtered through a first year acting student attempting King Lear. It's just so awkward. I ask you, Siddig El Tahir El Fadil El Siddig Abderahman Mohammed Ahmed Abdel Karim El Mahdi, what is this bullshit.

Luckily, Sisko was there to be awesome:
Dax: "I've been asking myself, why would anyone induct a bioelectric charge into a glial cell?"
Sisko: "A question I have always wondered about."

So it wasn't a total wash.

So, I know most of us have heard of a wonderful little book called The Price of the Phoenix (link to obsessively detailed Wikipedia entry). Basically, it's a Kirk/Spock fanfic that managed to get published. There are also two little compendiums of fanfic called The New Voyages and the New Voyages II.

And they are quite Takei.

So, let's get started, shall we?

Wow, I didn't realize how much of a lurker I really was...and also I'm regretting this username as it reminds me of high school. Also I'm regretting deleting the LJ I started back in like 2004, because that would have been cool to hang on to. Like, dude...2004!

EDIT: NO. NO REGRETS.
Wow I am on a posting roll today. Can you tell that I'm at a desk job with internet access and not much to do? Temping, how I love you.

The worst part about veganism?

When it's 11:00 am and you're super hungry and there's a box of store bought pastries sitting in the break room. 4 years in and I'm still tempted by croissants.

I don't know why I wasn't a believer before - holy cow, the Mirror!verse episodes? EPIC.

EMPRESS HOSHI SATO UP IN THIS BITCH.
Collapse